This is a review of Talent is Overrated by Geoff Colvin. I highly recommend this book, it got me to think about my work – and how I go about my work – in an entirely new way.

Check out this video of the great Jerry Rice. Jerry is widely considered the best ever to play the game. His records for total receptions, touchdowns, and receiving yards aren’t just #1 in each category – they’re ahead of the runner up by almost 50%. It’s likely no one will ever beat them.

The odd thing is, Jerry is widely understood to be lacking the one quality agreed to be the essential quality needed for a wide receiver – and the one that can’t be bought. Speed. Jerry Rice was never a particularly fast runner. So how did he stay so dominant – until he retired at 42 years of age? 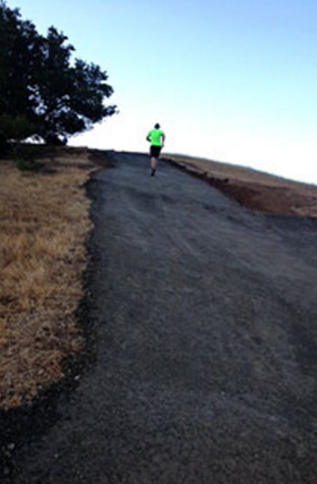 The answer is practice, hard practice. His offseason workouts were legendary. Jerry Rice and his trainer realized that three things were necessary to excel at his position – running precise patterns, evading defenders (outmuscle, outjump) and then outrunning them after the catch. So his offseason workouts focused on that. He did precision running of routes and worked on his hands to help with reception. Trail running helped him change directions on a dime. And his legendary Hill wind sprints helped give him explosive acceleration. He did this 6 days a week, in the offseason. His trainer would not release his regimen to people that asked –afraid they would try it, and hurt themselves. That workout helped him excel beyond his more talented competitors.

Above is a snapshot of Shizuka Arakawa at the 2006 Winter Olympics. Notice about 1 minute 30 seconds in this video what she does:

This is her famous signature “layback ina Bauer” move. This is an incredibly difficult movement – a backward, almost double leaning back that leads to a three jump combo. She spent 19 years of practice on this, and it’s likely that she fell almost 20,000 times trying to execute this. Onto a very hard, unforgiving surface.

Above are three album covers by the Beatles. If you’ve ever listened to Help, or any of their other first three albums – they’re pretty average. Something happened though about the time Rubber Soul came out. (Besides LSD and Timothy Leary!) At this point – and Malcolm Gladwell talks about this in his book Outliers – they had put about 10 years, or 10,000 hours of practice, in starting with those famous Hamburg days where they were playing multiple sets a day. Their music made huge leaps.

The book makes an excellent point that the one thing most people believe about talent – that you have to be talented to make it, and that if you aren’t born with it you’re out of luck
– is wrong, dead wrong. With enough practice, and hard work, you can achieve greatness. 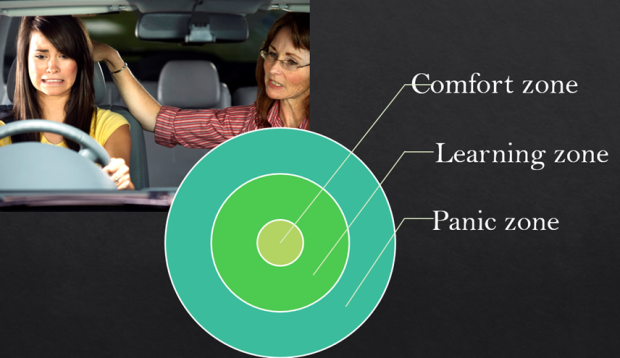 But Jerry Rice and the ice skater we mentioned earlier would tell us – hard work by itself is not enough. Both of those athletes learned to practice specifically on their craft in a very planned way. They stayed in a middle zone.

Mr Colvin pointed out studies done where we learn best in a middle zone – where we are challenged, but just out of reach of our current skills and abilities. Think about a teenager learning to drive. At first, we’re terrified – totally out of our depth. That’s the Panic Zone. We’re so out of our known experiences here that we’re a danger to ourselves and others – which is why there’s so many accidents for kid below the age of 24. Then we start to put things together, over time, where we match book learning with real world experience. That’s the optimum point -where we really start to excel and thrive. For most of us, we then move on to the comfort zone, where our abilities plateau. We’re good at driving at this point, but no better – just average. Definitely we’re safe at driving but not good enough to be a NASCAR driver. At this point we’re not reaching our potential.

The key is to stay in that challenging middle zone, where we are always trying to refine our technique or abilities according to an ability. See this graphic below:

Notice above – this is for trained classical violinists, specialists that have been spending hours in individual practice each week since the age of 5. You’ll notice – although the best (genius level) violinists practiced just as much as those considered better, what set them apart was the consistency. They sunk almost 2000 more hours than the level below them. Instead of just slogging along, they practiced what the author calls Deliberate Practice:

So the book calls out some common traits of forward thinking organizations.

This led me to do some thinking about my own life. I often think of my favorite author, Norman MacLean. He wrote two classics – A River Runs Through It, and a second book published after his death on the 1949 Mann Gulch fire called “Young men and Fire”. Both are classics, and outstanding. I always feel a sense of loss when I read these books, because there’s only two of them. What if he had started to write earlier than his late 60’s?

The book stresses being able to accept mentoring and feedback, and the value of failure – practicing deliberately and steadily making improvement. I will start following these steps in following my writing goals.

Rice’s six-day-a-week workout is divided into two parts: two hours of cardiovascular work in the morning and three hours of strength training each afternoon. Early in the off-season, the a.m. segment consists

The workouts are the key to Rice’s longevity and endurance. They are brutal because they are so long. And there is no question that they pay off. When he sprinted up the middle and outran the San Diego secondary for his first touchdown in Super Bowl XXIX, he felt the accelerators kick in. When he separated his shoulder only to return to the game and then actually run over a Chargers player, that’s when the weight training came in.

“I never have an easy day,” he said, “because there is never an easy day when the playoffs begin.”

It is what Rice says now — sitting on a bench with ice draped around his shoulder — that may symbolize the man more than anything. “I have to fight for everything,” said the man who came out of Mississippi Valley State, a Division II school. “I always have. I have to prepare myself every year. There is always some young guy who thinks he can take me. And then when the day is done, he realizes he can’t.

“Even when I was younger, people were waiting to see if I was a fluke. And I proved time and time again — through hard work — that I was not. Now, as I get older, people are looking for me to slip. They are waiting for me to lose a step. That hasn’t happened and I will get out of it before it does. If anything I’m faster and better than I have ever been.”

of a five-mile trail run near San Carlos on a torturous course called, simply, The Hill. But since five vertical miles can hardly be considered a workout, he pauses on the steepest section to do a series of ten 40-meter uphill sprints. As the season approaches, however, Rice knows it’s time to start conserving energy — so he forgoes The Hill and instead merely does a couple of sprints: six 100-yarders, six 80s, six 60s, six 40s, six 20s, and 16 tens, with no rest between sprints and just two and a half minutes between sets.

For the p.m. sessions he alternates between upper-body and lower-body days. But no matter which half of his body he’s working on, the volume is always the same: three sets of ten reps of 21 different exercises. Yes, your calculator’s right: That’s 630 repetitions a day.