Spent the weekend camping at the coast and ended up with bronchitis. Probably not the best time to be reading “The Hot Zone”, but that’s what I did. Frankly, it scares the hell out of me. Collapsing and bleeding out must be one of the worst ways to die.

Taking some #’s off the internet and playing around with it in Excel gives some interesting facts. Notice how close the red and blue bars are below. That’s showing, just about everybody that catches Ebola – and these aren’t small samples, often they’re in the hundreds – die. So far, Ebola hasn’t spread widely outside of a few areas of outbreak (helped along by hospitals with substandard hygiene practices like sharing needles). But we know it can spread via the respiratory system – it did in Reston VA a few years back with a colony of crab monkeys, and also in 2012 with pigs. The virus hasn’t successfully made that animal-to-human and then human-to-human respiratory jump yet.

The above includes all five varieties of the virus (including Marburg). Using a slicer, let’s look at just Ebola: 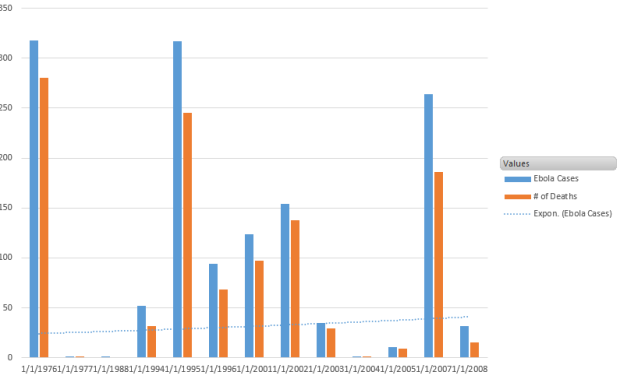 So, an interesting little look at the kinds of analytics you can do with PowerPivot in Excel and a simple data table. And a glimpse into Big Data. I could have sliced this up by country, etc.

And it illuminates how data can shed light on a big problem. In this case, Ebola is hiding out somewhere in Africa, and trying like a safecracker to “break into” the human race – different combinations each time. Notice the cluster of events after 1994 – on an almost yearly basis, you see more outbreaks. The chart below shows the gaps more across time. If and when the virus can spread through the air human-to-human, and with our global communications net shuttling the virus across the globe – there’d be no stopping it. With a 67% average fatality rate, it’d be a new Black Death. Terrifying.